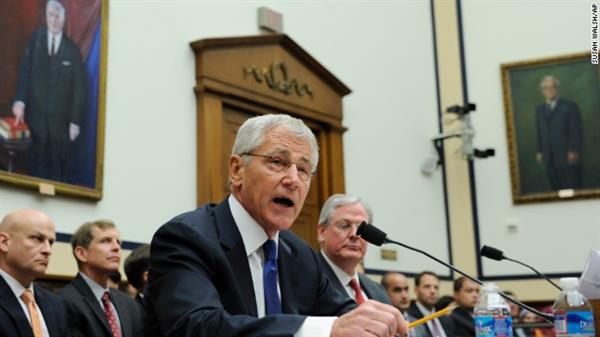 Defense Secretary Chuck Hagel faces the House Armed Services Committee on Wednesday.
U.S. Defense Secretary Chuck Hagel is in the hot seat as a House committee asks him about last month's trade of American soldier Bowe Bergdahl for five members of the Taliban.The Obama administration says it couldn't leave a soldier behind, but it has taken heat from both parties. Some lawmakers complain the United States gave up too much, or that it can't guarantee that the five Taliban commanders will stay away from the battlefield. Other arguments from critics: The White House should have informed Congress ahead of time, or the White House negotiated with terrorists in opposition to longstanding policy.The House Armed Services Committee hearing began at 10 a.m. ET. Follow highlights of the proceedings below, and check out the full story.
3rd & 7 37yd
3rd & 7 37yd
B
S
O
close
close

Powered by Platform for Live Reporting, Events, and Social Engagement